[Short version: Basically, what you do is mix up the bread dough--which, by the way, is a much wetter dough than in conventional bread recipes--and let it sit on your kitchen counter for 12 to 18 hours. Then you fold it a couple of times, using enough flour to be able to handle the dough, and let it sit for 15 minutes. After that, you let it rise for two hours, and then you bake it for about an hour in a pre-heated covered pot. I mix it up in the afternoon or before I go to bed and bake it the next morning. Very convenient.]

I admit it: I'm late to the party when it comes to no-knead (or no-work) bread. The technique was developed by Jim Lahey of the Sullivan Street Bakery and made famous in 2006 by Mark Bittman, who wrote about it in the New York Times and included it in his How to Cook Everything. And that's where I found it, so that's the recipe that follows.

There are lots of sites on the Internet about no-knead bread--just Google--but I wanted to put this up on my blog because I figured my friends might be more likely to run into the concept here than elsewhere. Also, I wanted to include photos of the various stages of the process so readers would realize that what they're making in the kitchen looks exactly as it should look.

Making bread this way is almost as easy and foolproof as making bread in a machine, but the result is many times better. The finished loaf is like artisan bread, with a very holey crumb (the part of the bread that's not crust) and a crisp yet chewy crust. I was amazed the first time I made this bread. The recipe is pretty nigh failure proof.

I've tried both bread flour and all-purpose flour, and I prefer the all-purpose flour. I use King Arthur unbleached all purpose flour and get excellent results. I have yet to try replacing some of the flour with whole wheat flour, but will do so the next time I bake a loaf.

You will need a lint-free kitchen towel (not terrycloth, obviously) and a covered 3- or 4-quart pot. I use a cast iron dutch oven, but you can use enamel, Pyrex, or ceramic, as long as you have a nicely fitting cover. At first I was worried that my pot might not be adequately seasoned, in which case the bread might stick, so I cut out a circle of parchment paper for the bottom. The other day I completely forgot the parchment paper and the bread didn't stick at all, so I've dispensed with that. I read on the Internet somewhere that letting the bread dough rise in a bowl would make for a higher loaf; if the dough rises on the counter, it will spread out, while the bowl will keep it from doing that. I'm not sure it really makes a difference, but i've been letting my dough rise in a towel-lined bowl-shaped basket. I find it easier to dump the dough into the pot using the bowl.

These are the ingredients:

Combine the flour, yeast, and salt in a large bowl. Add the water and stir until blended. The dough will be shaggy and sticky. 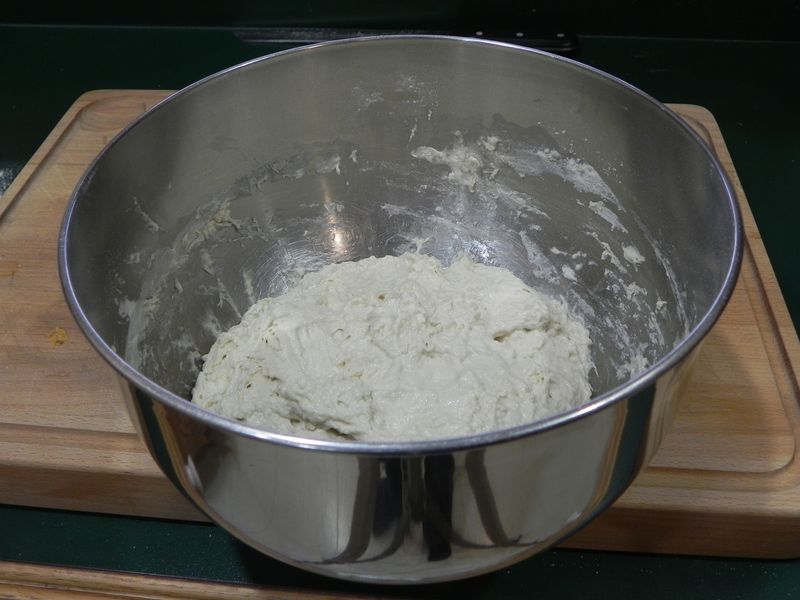 Cover the bowl with plastic wrap and let the dough just rest for 12 to 18 hours. The longer it sits, the more the flavor develops, but you can even shorten the time to 8 hours.

When you're ready to deal with it, this will be what it looks like: 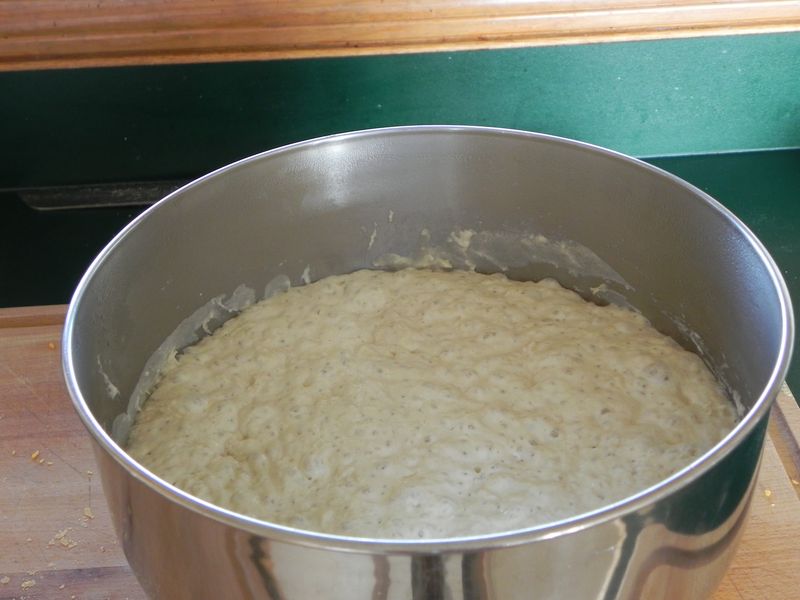 See how it's risen? See all the bubbles? That yeast has been working all night long.

Now flour your work surface. I use a silicone pastry sheet for all my bread adventures, because the stickiness factor is minimized. But with this dough, it's still sticky. For a cutting board or countertop, use a lot of flour. Flour your hands and even sprinkle some over the dough. I use a spatula to scrape the dough out of the bowl and onto the surface. Don't be dismayed by the softness and stickiness. This is what makes the bread good. At this point you want to fold the dough over a couple of times, sprinkle with flour, and then cover loosely with plastic wrap. The flour is so the plastic doesn't stick. 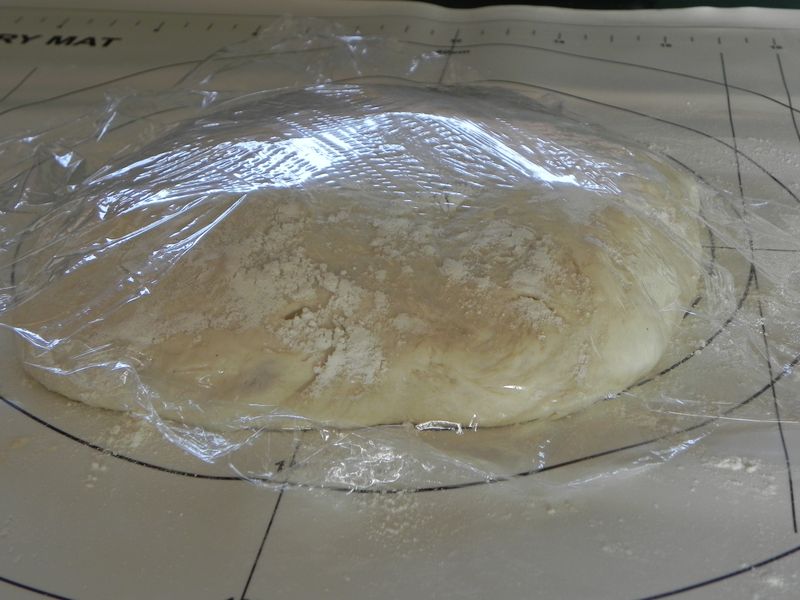 Now, using just enough flour to keep the dough from sticking, shape the dough into a ball. It's not much of a ball, really, as it's so soft, but do your best. Sprinkle the cotton, lint-free towel with cornmeal or whole wheat flour (some people use plain white flour, but I haven't had as good luck with that). Put the ball of dough, seam-side down (if you can detect a seam, which I usually can't, really), on the towel on your work surface. Dust with more cornmeal or flour and cover with another cotton towel or some more plastic wrap. Let rise for two hours.

Someone on the Internet recommended using a bowl for the two-hour rise, and I've adopted this method. 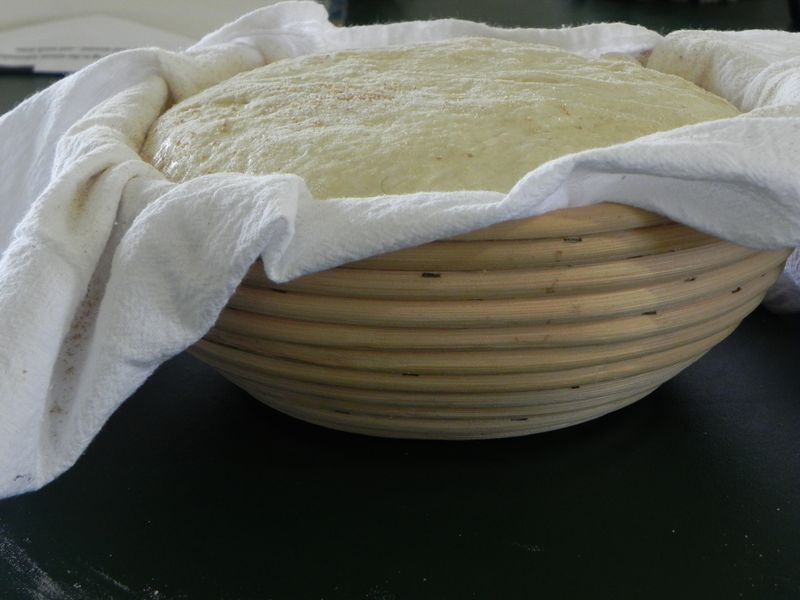 If my basket were completely non-stick, I'd dispense with the towel, but it isn't. The above photo shows the dough nearly finished with the rising time.

One hour into the rise time, preheat your oven to 450 degrees and place your pot, with cover, in the oven.

When the two hours are up, it's time to carefully remove the hot pot from the oven, remove the lid, and dump the dough into the pot. This is one reason I like the bowl: I just hang onto the towel at the sides of the bowl and hold it upside down over the pot. If you are picking up the bread in a towel and dumping it, topside down, into the pot, it's a bit messier, but it really doesn't matter. Everything evens out in the baking.

Here's the dough, covered with flour, in the pot: 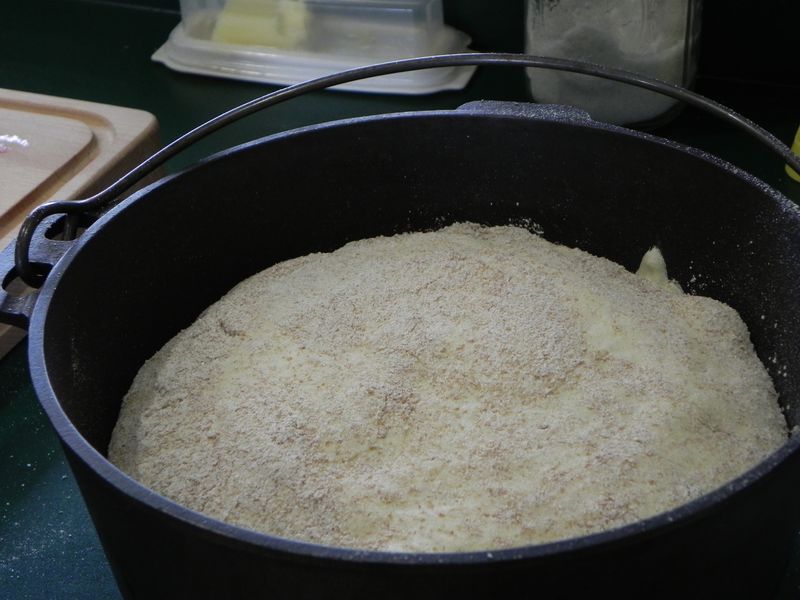 Now cover your pot and place it the oven. Bake it covered for 30 minutes, then uncover the pot and bake for another 20 to 30 minutes. You can pretty much count on it taking the whole 60 minutes, and
even then some. Don't be afraid of the crust darkening in places.

This loaf really should have baked a bit longer. I find that 65 minutes is often just fine. I run a thin spatula (heat-proof rubber or a narrow metal spatula) around the outside of the loaf before turning it upside down onto a wire cooling rack. 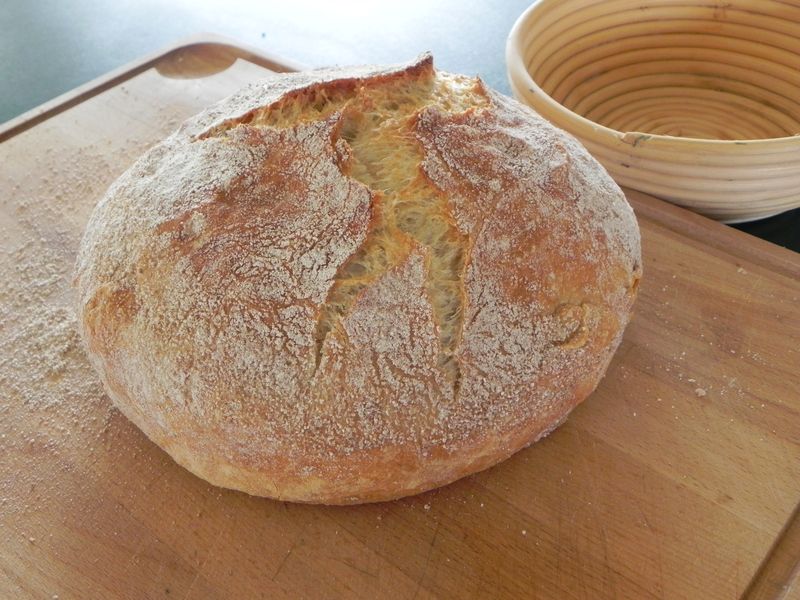 Cool on a wire rack for at least 30 minutes before you slice the bread. i recommend longer, as it's a bit tricky to slice when it's under a couple of hours old.

Here's what the bread looks like when you cut it open: 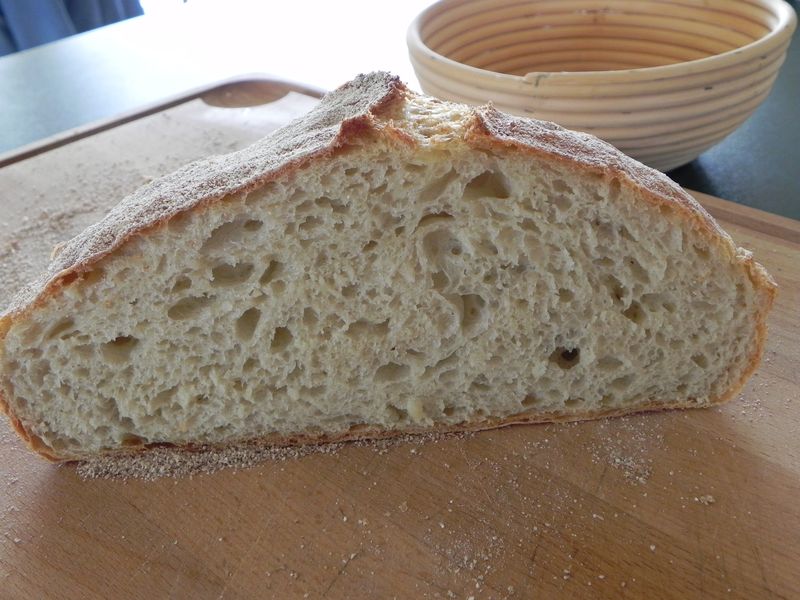 The crust retains its texture if you simply place the cut side of the bread down on a cutting board or other flat surface. It will keep for a couple of days this way.

This is so easy to make that I've been doing it a couple of times a week. My book group seemed to like it, and I hope they'll try it at home. People are always impressed by homemade bread, and this seems like some kind of hard-to-create artisan bread. I'm going to start adding ingredients, too, like Parmesan and herbs and other flours.