Ever since I took up bread baking I've been meaning to try baking my own crackers. Sometimes all I need is the motivation to try something. When I volunteered to help out with the food for our latest book group meeting, that motivation was born.

I thought I'd make some beer cheese--say, I should post that recipe--and then had the idea of making the crackers to go with it. I ended up making three different varieties. On the left, parmesan crackers; seeded crackerbread in the back; and rye crackers on the right. The secret to crisp crackers is to roll out the dough very thin and to be unafraid to let them bake a little longer than the recipe says. 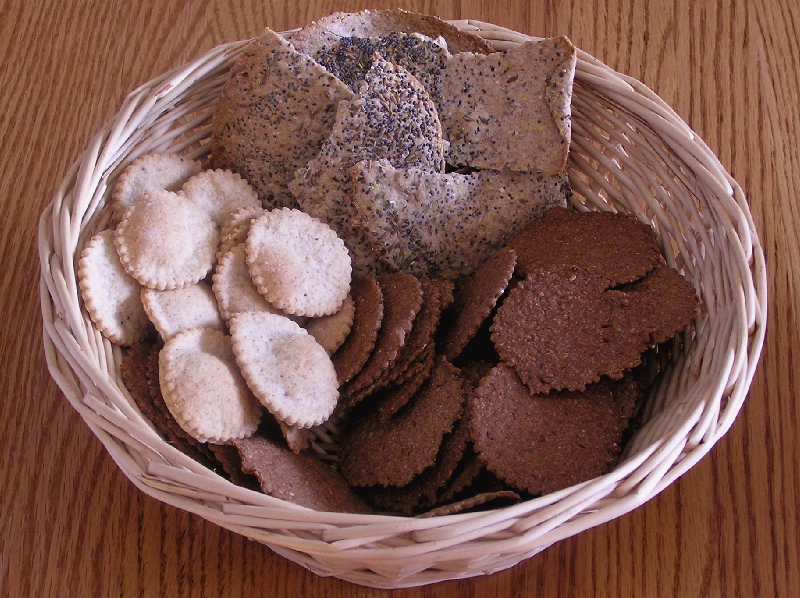 I made the crackerbread first, using a recipe from the King Arthur Flour company's Whole Grain Baking. This is unbelievably delicious. You bake the crackerbreads as wholes and just break them up as desired. They're rustic and sturdy. 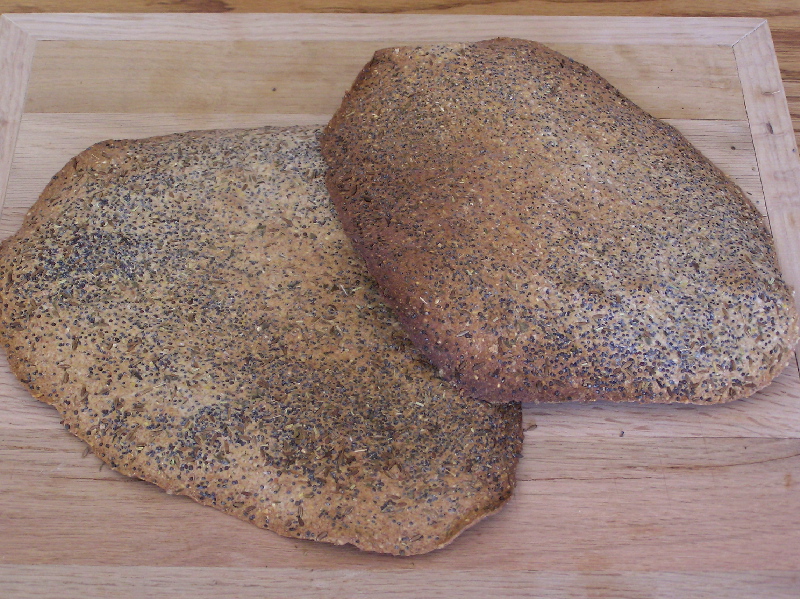 I just let them be amoeba-shaped, but if you're a perfectionist, you could try rolling them out as perfect circles. I don't seem to have the ability. I used my baking stone instead of a baking sheet.

Preheat the oven to 450 degrees. Line a baking sheet (actually, you'll need more than one) with parchment paper.

Combine the flours, cornmeal, and salt. Mix in the olive oil thoroughly, then add the water. You might not need all the water, so hold back a couple of tablespoons or so and check the texture, which should be stiff but not crumbly. Turn the dough out onto a floured surface and knead it until it's a stiff yet supple ball of dough. I did all this using my stand mixer, or it can be done in a food processor. You don't have to knead this much, just so it holds together well.

Mix the seeds and herbs in a small bowl.

Divide the dough into 8 pieces and cover with plastic wrap. Working with one piece at a time, scatter a couple of tablespoons of the seed-herb mixture on your work surface. Press the dough onto the mixture. Roll out the dough with a rolling pin. If the dough sticks, flip it over, apply more seeds, and continue rolling. Roll it as thin as you can get it. The idea is to get the seeds thoroughly stuck into the dough and for the dough to be really, really thin.

Place the breads onto the baking sheet and bake until the tops are a medium brown, about 7 to 10 minutes (mine actually took a minute or two longer). Cool completely on wire racks.

From the same cookbook comes this recipe for rye crackers.

Heat the oven to 325 degrees. Line some baking sheets with parchment paper.

Combine the water and molasses in a measuring cup and stir to mix. Gradually add the liquid to the dry ingredients, working it in until you can gather the dough into a cohesive ball. Or add the water to the mixture in the food processor, holding a little back in case you don't need it all. It should come together as a ball in the processor.

Divide the dough into 3 pieces, rolling it out one piece at a time until it's very thin, about 1/16 inch. Use enough flour on your work surface to prevent sticking.

Cut the dough into 2-inch squares, or do as I did and use a biscuit cutter to cut out circles. Transfer to the baking sheets. Sprinkle with salt, if desired. Bake the crackers until they begin to brown and smell toasty, 18 to 23 minutes. Cool completely on wire racks.

The next recipe comes from Mark Bittman's encyclopedic How to Cook Everything. I used 1/3 whole wheat flour instead of all white flour, and the taste was terrific. Next time I'd double this recipe, as these crackers disappear fast and the taste is quite addictive.

Heat the oven to 400 degrees. Lightly dust two baking sheets with flour (I used a baking stone instead). Put the flour, cheese, salt, and butter in a food processor and pulse until the butter and flour is combined (you should have crumbs of dough). Add the water and let the machine run for a bit. Continue to add water about a teaspoon at a time until the dough holds together but is not sticky. If you don't have a food processor, mix the flour, cheese, and salt together and cut in the butter using a pastry blender, fork, or your hands. When it's well combined, add water as above.

Roll out the dough on a floured surface to a thickness of 1/8 inch or less, adding flour as needed. I cut out circles of dough for the crackers; you could roll out a rectangle and score the dough so as to break it easily into squares or rectangles, baking the dough as a whole. Or you could cut the dough into strips or squares using a knife or pizza wheel.

Transfer the dough to the baking sheets. At this point I sprinkled the crackers with poppy seeds and salt. Bake until lightly browned, about ten minutes (it took longer for mine to get crispy). Cool on a wire rack. These are delicious warm, but you can keep them in an airtight container for a few days.

Recently I had a dozen or more people here for breakfast after an overnight camping party. In the past I'd bought frozen quiches to serve, along with other breakfast fare, but I really can no longer stand serving processed food, especially to guests. I found lots of breakfast casserole recipes on the Internet and finally settled on this strata. Alas, I don't remember the source ... 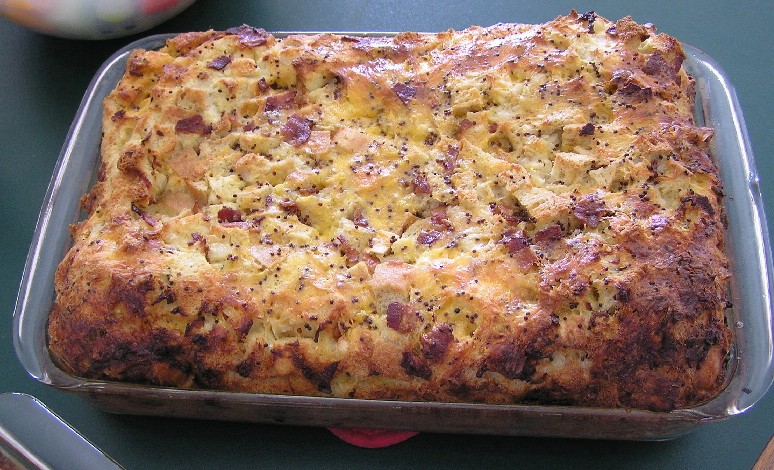 Okay, so it puffed up more on one side than on the other, but I hadn't realized it would puff up at all, and it looked really lovely. It was a big hit, too.

A strata is convenient for feeding a large number of people as it's made the night before and left in the refrigerator until you bake it the next morning. It's layers of bread, veggies and meat, and eggs and milk or cream. I used a cup of cooked, drained spinach, but I didn't think it was enough. Next time I'll definitely use more veggies; I'll try broccoli and perhaps roasted red pepper along with the onion.

Even so, this dish drew raves from my guests.

Cook bacon, if using, until crisp; drain and crumble.

Satue the onion and garlic in butter until soft. Saute or steam any vegetables to desired doneness (you don't want them mushy; use a particularly light touch if using spinach).

Place half the cubed bread in the baking dish.

In a large mixing bowl, beat the eggs, half-and-half, salt, pepper, and dried herbs until foamy. Add the shredded cheese and stir to mix.

With clean hands, press down gently until all the bread is soaked. Place plastic wrap over the baking dish, press gently again, and refrigerate at least 8 hours or overnight.

Next morning, preheat the oven to 350 degrees; bake for 65-80 minutes, or until a sharp knife inserted comes out clean. Let cool for about 15 minutes before cutting into serving squares. It will still be very hot at this point.

This will make about 15 to 20 brunch-size servings. I served it with cheesy shredded potato casserole (brought by a generous and merciful friend), croissants, and fresh fruit, and I had a few leftover squares of the strata. The leftovers were good, too!